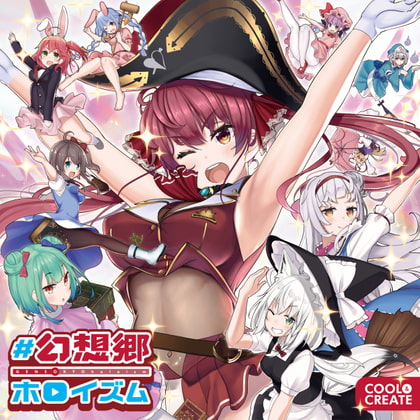 With no leads on how to get back to her own world, Marine decides she wants to go sightseeing.
Cirno, who lives by a lake, acts as her tour guide, but the dull lake and the just plain red
Scarlet Devil Mansion turn out to be overhyped and ultimately disappointing tourist spots.
However, she happens to meet Remilia and starts to get carried away again...

Cirno: That's right! I'm Gensokyo's most powerful fairy, Cirno!
Marine: Ammazing! To think I would one day get to meet the famous Cirno on the roadside!
Marine: You never know what to expect when you're a captain!
Patchouli: Is this fairy really that popular in your world?
Marine: Cirno's a super popular character! Even kids know about her! Idiot! Idiot!
Cirno: Idiot? Are you calling me an Idiot?
Marine: Ah, no, not at all. I was singing!
Marine: ♫ A sparkling diamonds! ♫
Cirno: She said I was sparkling! Like an Idol!
Patchouli: Indeed. Well I'm glad it was you we bumped into.
Patchouli: Hey, fairy. This human is a guest of Scarlet Devil Mansion.
Patchouli: She says she wants to do some sightseeeing.
Cirno: You mean she wants to have fun around here? The Misty Lake?
Patchouli: Yes, and to be her guide, a local like you would be the best choice, right?
Cirno: Of course! I'm the best!
Marine: Huh? What about you, Patche? You're not coming?
Marine: You're neglecting me? Is this neglect play?
Patchouli: I'll come back later.
Patchouli: So, go and play like a good girl.
Marine: Yes, mommy!

Cirno: Tada! This is Misty Lake's hottest spot!
Cirno: This is... the snow hut where I live!
Marine: Snow huts are nice and all, but is there somewhere to rest like a bench, or...
Cirno: A bench?
Cirno: What's up with you? Are you tired? If you want to sit, then just sit!
Marine: But the ground here hasn't been leveled or anything. It's just rough terrain.
Marine: It's hard just getting about. Talk about disappointing tourist spots...
Cirno: Hey! Are you dissatisfied in some way with my perfect tourist ambassadorship?
Marine: Dissatisfied? Well... There's also this mist which makes it hard to see anything.
Cirno: It's the Misty Lake. What were you expecting?
Cirno: Are you an idiot? An idiot?
Marine: To be called an idiot by Cirno of all people...
Marine: I think I'll take a look around to cheer up.
Cirno: Hehe! It's too early to get tired!
Cirno: Our next hot spot is that crag you can see over there! You see...
Marine: Yes?
Cirno: Before, there was a huge frog there!
Marine: Oh... Oh... How rural.
Cirno: He's here today too! Look, over there!
Marine: This is kinda like having to follow your little cousin around as he shows you his favorite spots near his house.
Cirno: Huh? What? I don't get it.
Cirno: Alright! Next is this way!
Marine: She really doesn't get it...
Cirno: Huh? Look! The frail one is back!
Marine: Ah! Patche! I'm so glad you're back!
Patchouli: Sorry for the delay. Making progress with your sightseeeing?
Cirno: Of course!
Marine: Um... Somewhat.
Patchouli: Well. I have a tourist spot waiting in reserve for any tourists.
Marine: A tourist spot... in reserve?
Patchouli: I spoke to Remi. She's waiting for you at the mansion.


Remilia: I've been waiting for you, Houshou Marine, Captain of the Houshou Pirates.
Remilia: I am the mistress of the mansion, Remilia Scarlet.
Marine: Oh! Mistress Remilia!? It really is Mistress Remilia! How wonderful!
Marine: I'm really so very glad that I could meet...
Cirno: I'm Gensokyo's Tourism Ambassador, Cirno!
Remilia: I don't remember inviting you. Why are you here?
Cirno: I was showing her around first! She's my prey!
Remilia: She's not a prey. She's a guest of Scarlet Devil Mansion. Got that?
Cirno: If we're guests, then at least bring us some tea. I'm thirsty!
Remilia: Do I look like a maid to you?
Marine: Um... Well, no reason to get so heated.
Remilia: Ahh... Anyway I heard your story from Patche.
Remilia: To speak painly, you are of deep interest of me.
Marine: Okay! Uh... Deep interest? You mean...
Marine: Mistress Remilia, are you the type who watches my streams?
Remilia: Streams? Hmm... Some kind of culture from the outside world?
Marine: Of course... There's no YouTube in Gensokyo...
Marine: Well, to explain streaming...
Remilia: Yes, it's interesting... Despite you living out there, you know about the people and goings-on of Gensokyo to this extent.
Marine: Yes, that's right! I mean, I love Touhou!
Marine: I even streamed Embodiment of Scarlet Devil!
Marine: I beat Flan, too!
Remilia: Huh? Flan...?
Marine: Ah, sorry! I'm talking about a game. I prefer the original games.
Cirno: What is she talking about? I don't get it at all.
Marine: I was just talking about how I know so much about Gensokyo.
Marine: As far as Embodiment— or rather, the mansion is concerned, I like Sakuya and Flan, and I like Futo from "Ten Desires", and I've played all the games.
Marine: I know everything there is to know about Touhou!
Remilia: Yes, you are well informed about Flan and things outside of the mansion.
Remilia: Even in Gensokyo, the number of humans who know that much about us is rather limited.
Marine: Ah... I'm acting like an online stalker again...
Marine: Sorry. I'm really not a weirdo or anything.
Remilia: Yes, just as I thought. This is deeply unsettling.
Marine: Huh? N-no... Really, I'm not creepy at all...
Patchouli: Dear me. And I was looking forward to hearing your thoughts, Remi.
Patchouli: There aren't many research specimens like this one. Please don't break it.
Remilia: Heh, who do you think you're talking to?
Marine: C-Can it be, that you did this to capture me...!?
Marine: Cirno, please speak up for me!
Cirno: Y-Y-You were a creep all this time!?
Marine: Idiot! I just said I wasn't!
Cirno: What are you going to do, Remilia? Capture her?
Marine: You're not going to help me!? Why did you even come?
Remilia: Good idea. A creep with that kind of knowledge can't be allowed to roam free near the mansion.
Patchouli: Now, now. No violence, okay?
Marine: Heeey! Ah, well... I need to go back home to stream, so it's about time I set sail...
Remilia: Your departure is cancelled.
Remilia: I won't feel calm until you've spilled your guts on everything you know.
Marine: I'm done for! Help me!

Remilia: Wh-What!? That's... Marisa!?
Marine: Aha! Marisa! Hey! Oof!
Marisa: Sorry to barge in on your scheming! I'm borrowing this human for a bit.
Remilia: This human thief—! Wait!
Marisa: I'm glad I anticipated this eventuality and interrupted. Alright! We're escaping!
Marine: Marisa! I should've known I could only rely on the protagonist team.
Marine: - Next time, I'll be sure to play as you, too!
Marisa: - Be quiet before you bite your tongue!
Marisa: I'm going to zip you to the shrine.
Marine: Huh? The shrine?
Marisa: Things are bad. For you, and for Reimu.
Marine: Reimu?